Ten years ago three former students of John Lange, Robert Condia, Karen Lange, and Eric Kahn, together with John Lange, published a book trying to put the work and influence of John into perspective. Toward that end Bob tried to interpret John’s philosophy in the introduction, Karen tried to structuralize his work, and Eric summed up what it meant to be a student in John’s studio. Now that the studio is in the past, John having retired from teaching last spring, this gallery exhibition attempts to make visible the work John committed to over the course of the last 44 years. In the introduction to Polemical Drawings, Bob Condia writes:

As your guide, I am hesitant. These Polemical Drawings by John Lange are one man’s search: an illustrated transcript. If you know John, then you recognize these arguments from his continual effort to bring his realizations (as Louis Kahn would say) to light, to language. Such condensation of ideas through many years makes them dense and idiosyncratic.  Idiosyncratic in that one’s own familiarity makes certain ideas, like an artist or mathematician’s symbols, hermetical.  His words and images are the working through of ancient concepts in a modern way. A persistent reading and rereading of the paragraphs along with a close inspection of the drawings will bear fruit in flashes of insight that Gaston Bachalard calls the poetic image, and what poet Jane Hirschfield calls concentration. I imply the logic of Prof. Lange’s propositions present a wisdom that is quite understandable, if difficult to settle your finger on. 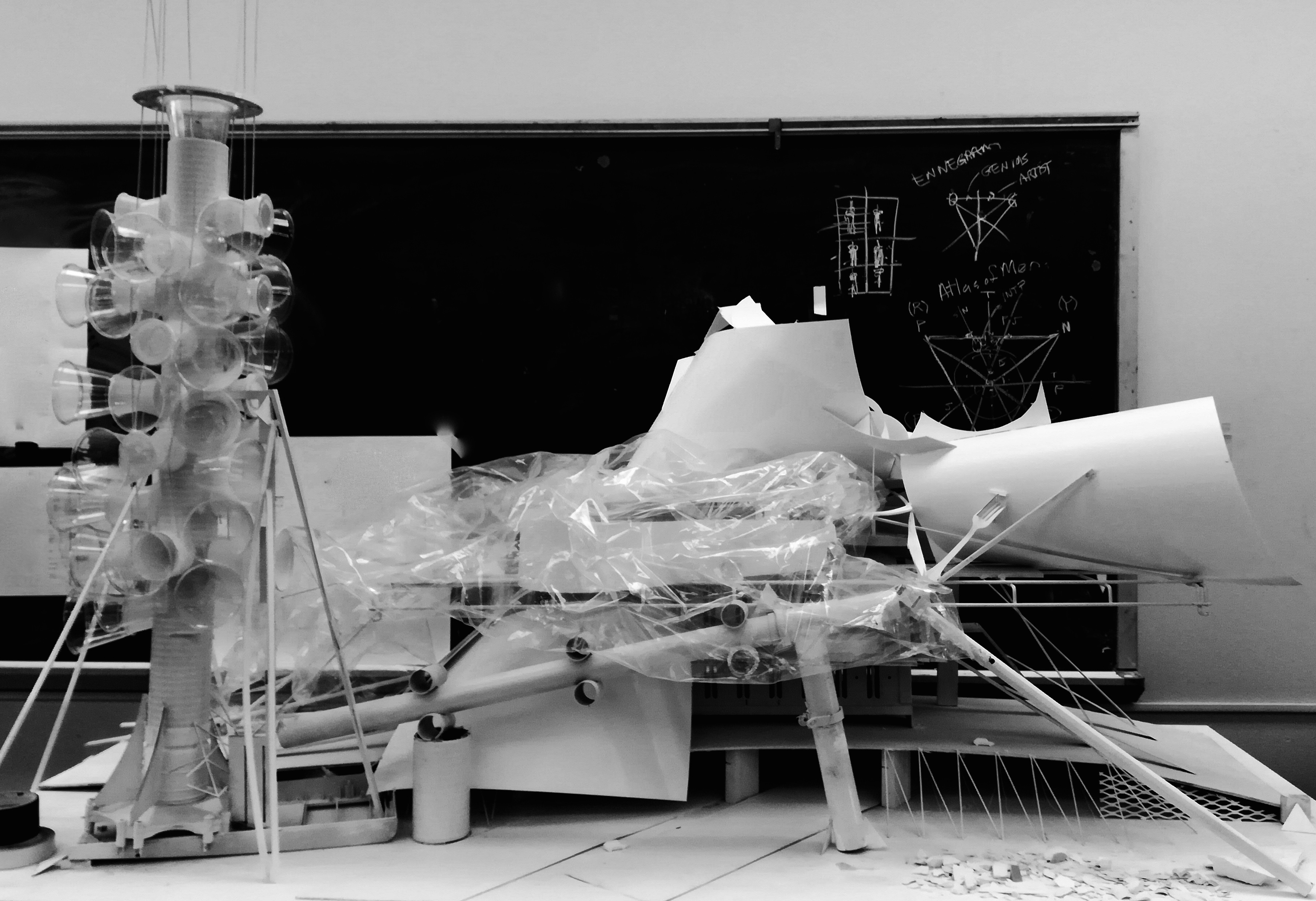 An architect with a construction background, a model builder with a Ph.D., and a painter of landscapes and spacescapes, John is the jack of all trades of studio professors. To be in his studio was unlike any other. He demanded confidence where there was none and dedication to the unknown. To quote former student Eric Kahn:

Almost thirty years after first meeting John Lange, the experience of being in his architectural design studio in the School of Architecture and Environmental Design at California Polytechnic State University is still fresh, saturated and immediate. Many of us stood transfixed by the large format grease pencil drawings and railroad board constructs John routinely completed within a single studio session. Their influence and intensity provided us with a powerful model for engaging and developing architectural space in real time. I underscore this last point; in the pedagogical context of the school, John’s method was absolutely unique. It was both immediate and visceral.

To illustrate the experience of being in John’s studio, Eric continues:

(Spring 1977): I’m watching John, he’s standing in the front of our lab space at an open table; he’s got a pile of orange railroad board, Elmer’s white Glue and an Olfa blade. He cuts (freehand) a semi-circle out of a large orange sheet of railroad board and rotates the cutout 90 degrees about its diameter… he then flips the entire board and cuts another semi-circular opening, mirrored about the same center line.  A transformation occurred; what is paper sitting on a table; its become a steel wall. John then pulls both vertical edges back, arcing the flat plane; he then hastily glues a 1/2” square fabricated paper tube to the back of the arc. The chord becomes a structural tension member; cardboard behaves similarly to steel, the model becomes a building, complete with gravity, orientation and plasticity. The stored plastic energy in the arc was palpable; in that moment he explained more to me than other teachers who spoke for hours. The naked expression of architecture, as distinguished from self-expression… Later he cut’s out a scaled human figure and strategically places it within the space…

John is a pragmatist; the drawings are meant to be viewed as inhabitable. Initial gestures of the drawing define the structure, a requirement of architecture. Shadows define form and space, linking building to ground and site. Figures perform their work defining the action of the place. From Bob Condia, “Look into the spaces.  Unfamiliar combinations in form are made knowable from the context and people.” From the book, Polemic Drawings:

The act of drawing, by definition, is the translation of the three-dimensional unto a two–dimensional surface. This began as early as drawings of bison on a cave surface in a ritual act of art calling forth the image of the hunt in a secret stone edifice. Surrounded by shadow the artist with the torch, his source of light, began to delineate the image of the hunt with charcoal and paint. The original outline of the beasts was sketched as imagined and articulated form was rendered with ochre smeared or blown upon the striated rock. The magician or artist aroused emotions in preparation for the hunt. Drawings served as means of representation and inspiration, as well as practical communication and instruction for the group or congregation of native hunters.

In modern time architecture and art is generated by the same emotional and instructive basis for conception and directed thinking. The act of drawing still includes the sketching of primary forms with the final articulation of shade and shadow by the artist to bring to life a line drawing into full realization, to bring the artist’s imagination to light. The act and term of surface rendering derives from the same root as the physical act of rendering of animals in the caves and their visual representation on the walls.

Architecture evolves through the development of the mind; specific details become organized in an overall conceptual scheme and complexity is arrived at intuitively. Creativity goes beyond the ordinary through the integration of ideas, realizing the potential in any object, combining various experiences. To quote Eric Kahn, “John was the teacher who established the point from which the arc of the student swings. Relatively few teachers can claim this legacy.”